When a shingle loses its protective granules, it’s time to get a new roof.  Repair is not an issue since the asphalt underneath the granules that are left has dried out and has gotten brittle. 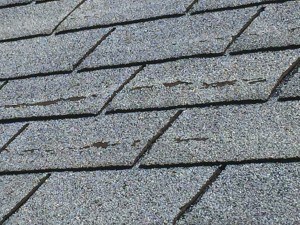 When the protective granules on a shingle have worn off, it’s time for a new roof.

In order to replace a shingle you have to be able to lift up the shingle above it enough so that you can secure each shingle with nails.  If you lift the shingle above it and it cracks off because it is dry and brittle, you then have to continue to remove shingles from the problem part up to the ridge (top part).

You’ll also be compromising any rubberized ice/water membrane underneath it because, while the shingles can look nice when replaced, the removal of a shingle leaves a hole in that membrane that would then be concealed.  That creates a potential leak point.