Ask the Expert: Why is the trim on the bottom of my house bent?

What is causing the trim on the bottom of my house to get bent and knocked off? 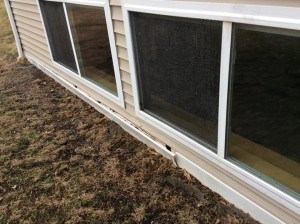 Water saturated soils heave up and expand in the winter, causing problems for some homeowners.

The photos tell the story.  If you look closely you’ll see that your builder used a piece of custom bent aluminum which he adhered over a piece of foam on the bottom.  That piece of trim is meant to mimic the apron on older homes.

Sometime since the home was built it appears that there was soil pushed up against that wall so that it touched that trim piece.  It may have never been a problem if we didn’t live in a climate with freezing temperatures, but we do.

The soil you used to build up next to the house is topsoil.  Think of topsoil as sponge material.  It does nothing for drainage but it does hold water fairly well which is why it’s great for growing plants in.

With an unusually large amount of topsoil next to the house, the topsoil held

Soil pushed against a house can cause more problems than your average homeowner could know about.

water and then it froze.  When water freezes it expands (much like the top of an ice cube has a little hump).  Since that soil was saturated with water, when the frozen ground expanded, it heaved up right next to the trim.

In the spring, the soils thawed and left no sign of what could have caused the heaving.

So here’s the solution:

Remove the topsoil that is next to the house.  You should never have soil against the bottom row of siding on a house.  Soil should only come in contact with masonry such as basement block or poured concrete.  Not only will you not have the problem of frost heave knocking off your trim only to be repaired each spring, but you are less likely to have problems with termite infiltrations and rotten wood.

Once that soil is pulled back so you have a solid 3 to 4 inch space between the ground and the siding, you can have a professional bend and install a new custom piece of trim to be adhered to the bottom foam board.

Posted in Customer Questions and Answers