To fix an elusive home improvement problem you have to have a stubborn determination, an open mind, and sometimes a strong stomach.  That was the case when I was asked recently what caused a new aluminum gutters to fail after just a year.   The answer took long to get to and in my 14 years in the home improvement industry I’d never before run into such a bizarre situation. 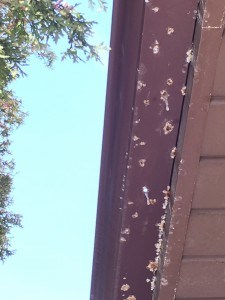 I was called by an elderly customer.  We’d done gutters for a family member and she liked our work.  We then did her gutters and she loved them.  A year later I got a call.  The gutters were pitted and corroded to the point that they wouldn’t hold water.

The investigation and exploring possibilities

I’ve seen gutters like this before.  Homeowners had thrown salt up onto their gutters in an effort to get rid of ice damming and ruined their gutters.  But she was elderly and I knew there was no way she could have thrown salt onto her roof.

I called my supply house and they’d never heard of anything like this except when people have thrown salt onto their gutters.

I called the manufacturer to see if this could be a warranty issue.  They wanted me to take a photo.  The photo was inconclusive and they needed a sample of the metal to send to their lab to figure out the cause.  They said that only some sort of acidic substance that would react with the metal could cause this.

Could it be the cedar trees that were near the front of the house I asked?  They didn’t think so.

I’d climbed up and looked at the gutters.  It was January.  There was no sign or tip off that there was anything up there.  The roof was frozen.  The gutters were frozen.  The problem was only from one section of the gutter on down.

A Plan of Attack

Whatever cause the problem, we knew the gutter section needed to be replaced so that it didn’t ruin the wood on the steps and make it unsafe for my elderly customer to get in and out of her home.  What’s worse, whenever there was a melt or rain it would drip on her.

I had looked at this problem in the winter.  My installer looked at it in the winter.  My manufacturer looked at the problem.  None of us knew a definitive reason for what caused this problem of pitting and corrosion in the gutters.  There was a cedar tree close by and we considered that perhaps since cedar trees thrive in acidic soils, that it may have been the cedar which the homeowner did have cut back.  We even talked about using a silicon roof costing to be used in the inside of the gutter to avoid disintegration of her new gutter which we were going to put up. 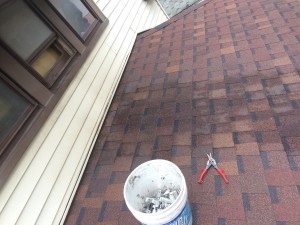 It had been two months since the original call.  Weather had warmed back up into the 40’s and the snow was melted.  My installer went out first thing in the morning — at 7:30am, and started to remove the gutter.  But the gutter was wet.  What stuck out as strange was that the short piece of roof that was just above the gutter and all the way up to the window was wet but it hadn’t rained in days.

And there was a smell.

A crew member didn’t know what it was as he started to remove the damaged gutter.  My crew chief climbed up there and immediately recognized the smell.  Urine.  The short section of the roof above the gutter was soaked.  The gutter still had moisture in it — moisture that hadn’t yet evaporated.

Urine is acidic and over the previous year the urine had destroyed the gutter and was starting to affect the roof. 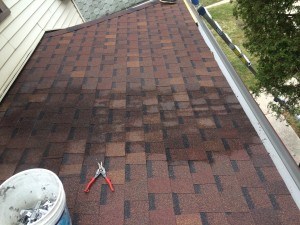 Why would someone do that?

It turned out that there’s only one bathroom in the house and the adult son of the elderly woman lives upstairs.  Rather than come downstairs to use the bathroom, he just opened the front window and urinated right out the front window in his busy neighborhood.  Neighbors had never mentioned anything to my elderly customer so she never knew about this behavior.

Removing a gutter requires you to remove the screws holding the gutters on and that means your face is right next to the gutter in order to get you leverage.  So chalk this one up to the most bizarre sleuthing that we’ve ever had as a home improvement company — and in the end, one of the least sanitary jobs we’ve worked on.

Jim McGuigan is an A+ rated accredited contractor with the Better Business Bureau.  He uses his expertise in hydrology and flood water management to explore innovative solutions to gutter and water management challenges.

Posted in Gutters, Questions and Answers