Where Should a Shingle be Nailed?

The nailing zone is manufacturer required nailing area just below the center of the shingles.  Manufacturers have specific instructions for installation companies and usually it gives about 3/4″ to work with in order to optimize the gripping power that the nails will have to hold down the shingle.  But it is not the nailing zone alone that holds down all shingles. 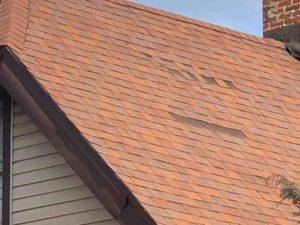 In this picture you can see four areas where shingles are showing signs of being High Nailed. The two up top and one by the gutters edge are sliding off and the middle is missing.

A common problem we see is easily avoidable and had the contractor, or homeowner if it was a DIY project, read the wrapper on the shingles themselves, this would have been avoided.  We often see nails right along the top of the shingle.  This may work for a short period of time, but eventually they let loose. When a shingle gets fastened high, the third connection point for the shingle
below is missed and therefore more prone to being blown off. Shingle “Blow-off” occurs when wind gets underneath the shingle and blows some or all of the nails through leaving the shingle hanging.

While the homeowner could choose a repair, this could be a sign that part or the whole roof was high nailed. A further roof inspection could reveal more a clearer direction.

Posted in Questions and Answers, Roofing