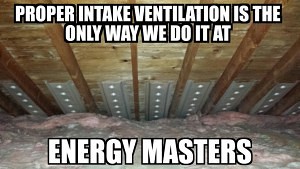 When warm air comes in contact with your roof decking (the boards under your shingles), the snow on top of them begins to melt.  As this newly melted water moves down your roof it continues until it hits a point where there is no warmth or heat underneath it that will keep the water in its liquid state.  In most cases that is when the water gets above the soffit, which is the boards (or aluminum) that is just below the roof line but looks like a small ceiling that overhangs the walls of your home.  The soffit is parallel to the ground.

At that point it freezes.

In some cases it doesn’t freeze until it hits the gutters, in which case you see large amounts of ice build up on top of the gutters.  It then creates a bit of a hump, or “dam” which makes it so that when the water above it begins to flow again, it builds up more water behind the dam.  It freezes either then or at night when it gets colder, and the process repeats itself.

Eventually the frozen water goes several feet up the roof from the bottom of the gutters until it gets above the top of the first shingle (approximately 16 inches).  When it gets to that point, and water thaws into its liquid state, it leaks behind those shingles, going through the roof decking and soaking drywall and insulation below it.

So what is the solution?

Keep that roof decking cold and the snow above it will not thaw until such time as the water in the gutters is thawing at the same time.  When that happens, the water can move along the gutters and down the downspouts.

So how do you do that?

Adding vent chutes to the underside of the decking so that it allows cold air to travel from the underside of a vented soffit, to up to past where your insulation stops.  This cold air, through the process of convection, allows cool air to flow from the soffit, up through the vents in the top of your roof.  (It also helps to get rid of unwanted moisture in the air.)

Then, you can put insulation up against those cool air chutes to keep the air space below them, but above the drywall on your ceiling, warm without risking warming up the roof.